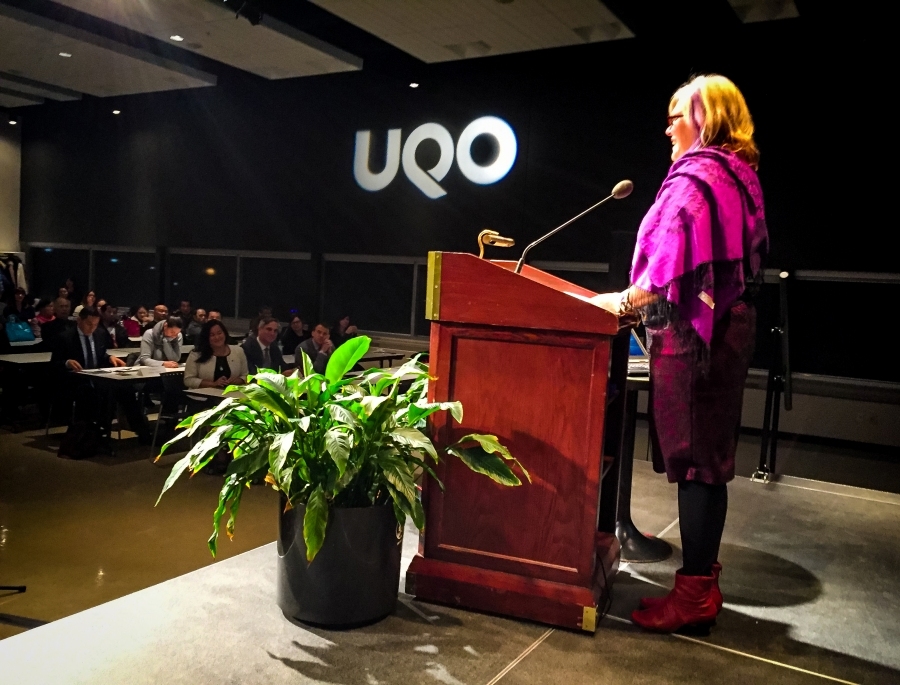 CFSC proudly worked with partners in the Coalition for the Human Rights of Indigenous Peoples to host a symposium, Implementing the UN Declaration on the Rights of Indigenous Peoples: Priorities, Partnerships and Next Steps, to celebrate the 10th anniversary of the United Nations’ adoption of the Declaration. Our Symposium took place at the University of Quebec in Gatineau, November 20, and 21, 2017.

We had a wide breadth of speakers – politicians, Indigenous leaders, academics, lawyers, and grassroots activists. I was honoured to work with long-time CFSC partner Kenneth Deer to co-host the events. The symposium was an excellent opportunity to advance discussion on what is already happening and how we can effectively build to create more positive change. Implementation at the community level, as well as political and legal opportunities, were discussed. In addition, we had panels on the role of human rights commissions and free, prior, and informed consent.

On the opening evening we had a keynote presentation from Grand Chief Wilton Littlechild, who spoke to his lengthy international experience as well as his role with Canada’s Truth and Reconciliation Commission. We also heard three national Indigenous leaders – Assembly of First Nations National Chief Perry Bellegarde, Inuit Tapiriit Kanatami President Natan Obed, and Métis Nation President Clem Chartier – give their thoughts on implementation.

This opening evening featured a presentation from the Minister of Justice and Attorney General of Canada, Jody Wilson-Raybould. Minister Wilson-Raybould shared her thoughts on implementing the Declaration and the need for greater recognition and advancement of Indigenous Peoples’ rights, particularly the right of self-determination. During her substantive talk she announced federal government support for MP Romeo Saganash’s private members bill, C-262. CFSC and the Coalition have supported C-262 –  An act to ensure that the laws of Canada are in harmony with the United Nations Declaration on the Rights of Indigenous Peoples. We see it as a critical framework to help realize the potential of the Declaration. We were delighted to have the Attorney General of Canada take this opportunity to signal government support for the work.

Key elements of Bill C-262 include: repudiation of colonialism and doctrines of superiority; affirmation that the standards set out in the Declaration have application in Canadian law; and review and reform of federal legislation to ensure consistency with the minimum standards set out in the Declaration. The government of Canada must, in consultation and cooperation with Indigenous Peoples, develop and implement a national action plan to achieve the objectives of the Declaration.

A mere two weeks after the symposium, I had the opportunity to be present in the gallery of the House of Commons as Romeo Saganash opened the debate at second reading on C-262. An impassioned speech by Saganash was followed by whole-hearted support from the Liberal government. In the House of Commons debate, Saganash emphasized, “it is important that we remind ourselves that Indigenous peoples’ fundamental rights in this country are indeed human rights.” This is indeed an important point because  human rights generally have greater protections than other rights.

These developments are big successes in the ongoing work of implementing this global human rights instrument. CFSC has placed a high priority on this work for many years and we are delighted to see our faithful and persistent work bearing fruit.

Last summer Canada was reviewed by the United Nations’ top anti-racism body, the UN Committee on the Elimination of Racial Discrimination (CERD). In their report, CERD strongly supported Indigenous Peoples and their allies in urging Canada to adopt a legislative framework and national action plan to implement the Declaration.

As we begin 2018, we are very hopeful that we can achieve a legislative framework. C-262 continues its second reading debate in February and then, with a successful vote in the House of Commons at that stage, it will progress to
committee where it can be further scrutinized and reinforced. At such time, all political parties, as well as a diverse range of Indigenous and non-Indigenous witnesses, can contribute to the discussion with the aim of achieving reconciliation, justice, healing, and peace in a contemporary human rights framework.

Legislative implementation of the Declaration will help ensure that any future government will not easily reverse progress made. The Declaration continues to grow as a beacon and catalyst for achievement, well-being, and renewed hope. CFSC will continue to work with our many partners to ensure the ongoing growth of implementation, including with a legislative framework.

We encourage readers to let members of parliament know that you support C-262 and hope that indeed support for legislation to implement the Declaration can and must be a non-partisan achievement. We are all winning when human rights are respected, protected, and ensured.