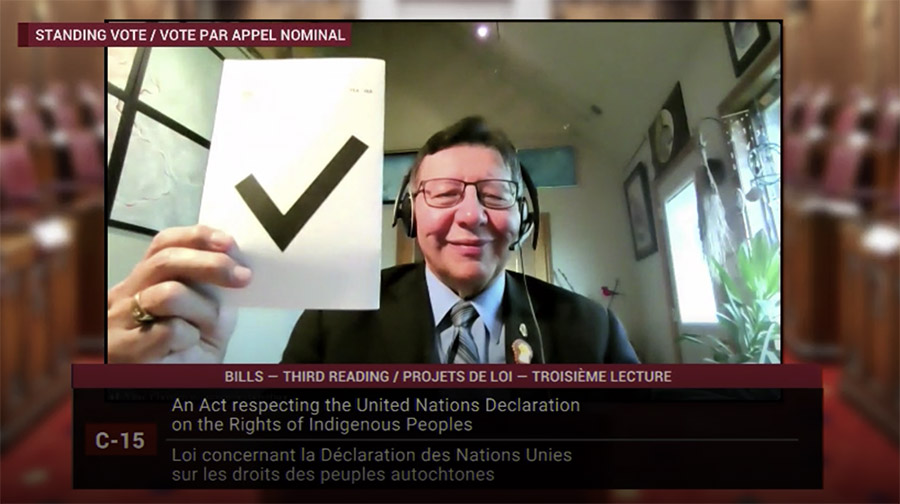 Our Nations and organizations are celebrating the fact that long awaited and hard-fought national legislation to implement the United Nations Declaration on the Rights of Indigenous Peoples (UN Declaration) has successfully passed the final vote in the Senate.

Bill C-15 An Act Respecting the United Nations Declaration on the Rights of Indigenous Peoples, establishes a clear and ongoing legal commitment for the federal government to ensure that its laws, policies, and programs are consistent with the global human rights standards affirmed in the 2007 UN Declaration.

Cheryl Casimer, First Nations Summit political executive said, “The implementation Act is a welcome and much needed opportunity to finally make a decisive break with Canada’s long history of ignoring and denying the human rights of Indigenous peoples. The Act does not create new rights. What it requires is concrete, meaningful, and timely action to ensure that Canada finally lives up to its obligations under Treaties, the Constitution and international law.”

The implementation Act requires the federal government to “take all measures necessary” to ensure that the laws of Canada are consistent with the provisions of the UN Declaration. The Act also requires that a National Action Plan to implement the Declaration through law, policy and programs be developed and adopted within two years.

BC Regional Chief Terry Teegee emphasized, “There is a lot of hard work ahead to fulfill the promise of this legislation. Passing this Act is an important victory for the human rights of Indigenous peoples. Our ultimate goal, however, is to see our inherent rights recognized, respected, protected and fulfilled.”

Romeo Saganash said, “The UN Declaration is a powerful human rights instrument precisely because Indigenous peoples were full partners in its development. The new implementation Act brings this same spirit of cooperation to the vital work of turning the Declaration’s provisions into action.”

Since the global adoption of the UN Declaration, Canadian courts and tribunals have increasingly turned to its provisions to help guide the interpretation and application of federal, provincial, and territorial laws and regulations. The Act affirms the reality that the Declaration already has legal effect in Canada. However, instead of leaving interpretation solely in the hands of the courts, the Act requires the federal government to take active measures, in consultation and cooperation with Indigenous peoples, to reform its laws.

“This is such a tremendous victory!”

Ellen Gabriel said, “Indigenous peoples have been forced to go to Canada’s courts over and over again because our rights have been denied and the exercise of our rights has been criminalized. All governments have the obligation to uphold the highest standard of human rights protection, without discrimination. The new Act is an opportunity to create an open dialogue with all rights holders, including traditional governments, something that is sorely lacking in the lopsided relationship Canada has with Indigenous peoples today.”

Professor Brenda Gunn noted, “Indigenous peoples have won many important victories in the courts. This Bill is not about making a choice between this existing jurisprudence and international law. The two must work together. The point is to adopt a more cooperative, proactive and coordinated approach so that Indigenous peoples don’t need to rely on the courts to uphold rights that should be recognized and respected in the first place.”

The UN Declaration affirms Indigenous peoples’ inherent right to self-determination, including the right of Indigenous peoples to make their own decisions about how their lands will be used and protected and how their cultures and traditions will be maintained. The Declaration prohibits racial discrimination, requiring special measures to address the needs and safety of those at greatest risk of human rights violations, and calls on states to respect and enforce the Treaties and other agreements they have entered into with Indigenous peoples.

Cheryl Knockwood, Nova Scotia Human Rights Commission Chair, emphasized, “First Nations, Inuit and Métis Nation leaders and activists fought for the Declaration at the United Nations so that its provisions could be implemented here at home. Today, more than ever, the framework of the UN Declaration is urgently needed so that the continuing history of profound human rights violations against Indigenous peoples in Canada can finally be addressed.”

The implementation Act explicitly rejects colonialism and the doctrines of racial superiority, including Terra Nullius and the doctrine of discovery, long used to deny Indigenous peoples’ fundamental rights. The Act states that “all relations with Indigenous peoples must be based on the recognition and implementation of the inherent right to self-determination.” The Act also calls for “concrete” measures to “address injustices, combat prejudice and eliminate all forms of violence, racism and discrimination, including systemic racism and discrimination.”

UBCIC President, Grand Chief Stewart Phillip said, “Sooner or later, Canada had to come to terms with the fact the UN Declaration is part of our legal reality. While I regret the fact that it has taken so long to pass national implementation legislation, I am encouraged by the strong foundation for action set out in this Act.”

Chief Wilton Littlechild said, “The implementation Act was adopted with the support of the vast majority of Parliamentarians, across party lines. It will be crucial to maintain this momentum and the political will to embrace change as we move ahead with the vital work of reforming laws and developing a National Action Plan.”

The Act is closely modeled on Bill C-262, a private Member’s Bill that was passed by the House of Commons in 2018 but was prevented from becoming law by a filibuster in the Senate. In 2019, the province of British Columbia adopted provincial implementation legislation based on this same model.

Jennifer Preston, Canadian Friends Service Committee General Secretary said, “Canada now has an implementation model that is both principled and pragmatic. The support for Bill C-15 across party lines is an important foundation to move ahead with concrete, meaningful action. I encourage all provincial and territorial governments to work with Indigenous peoples and follow the examples of both BC and the federal implementation Act to explore the potential for similar implementation measures within their own jurisdictions.”

The Truth and Reconciliation Commission called for implementation of the UN Declaration, as well as for government officials, lawyers, corporations and others to educate themselves on provisions.

Laurie Buffalo, Councilwoman Samson Cree Nation, declared, “Treaty Nations across Turtle Island played a crucial role in creation and global adoption of the UN Declaration. Their hard work and perseverance lead to the first global human rights instrument to truly protect our Treaty rights and uphold their original spirit and intent of mutual respect and peaceful co-existence. Now, through national implementation, we have the chance to bring this vision to life in really concrete ways that will benefit our communities and future generations.”

Grand Council of the Crees / Cree Nation Government Grand Chief Abel Bosum said, “Indigenous peoples have worked, over the course of many decades, to advance the UN Declaration. It will be crucial going forward that we set aside myths and misrepresentations about the Declaration and its implications and instead draw on the considerable expertise that has been developed over these long years of advocacy.”

The UN Declaration was adopted by the UN General Assembly more than 13 years ago, on September 13, 2007, as the global minimum standards for the “survival, dignity and well-being” of Indigenous peoples.

Dr. Sheryl Lightfoot concluded, “From an international perspective, Canada’s implementation legislation is a landmark achievement. Since the global adoption of the Declaration, the UN General Assembly has repeatedly re-affirmed the obligation of all states to fully implement its provisions. This Act provides an important example to the international community of how to fulfill this obligation in a way that is concrete, practical, and wholly consistent with the rights framework of the Declaration itself.”

The above joint statement was made by the Coalition for the Human Rights of Indigenous Peoples and endorsed by the following organizations and individuals:

BC Assembly of First Nations

Union of BC Indian Chiefs

Lea Nicholas MacKenzie, former Special Advisor on Indigenous Issues at the Canadian Mission to the UN