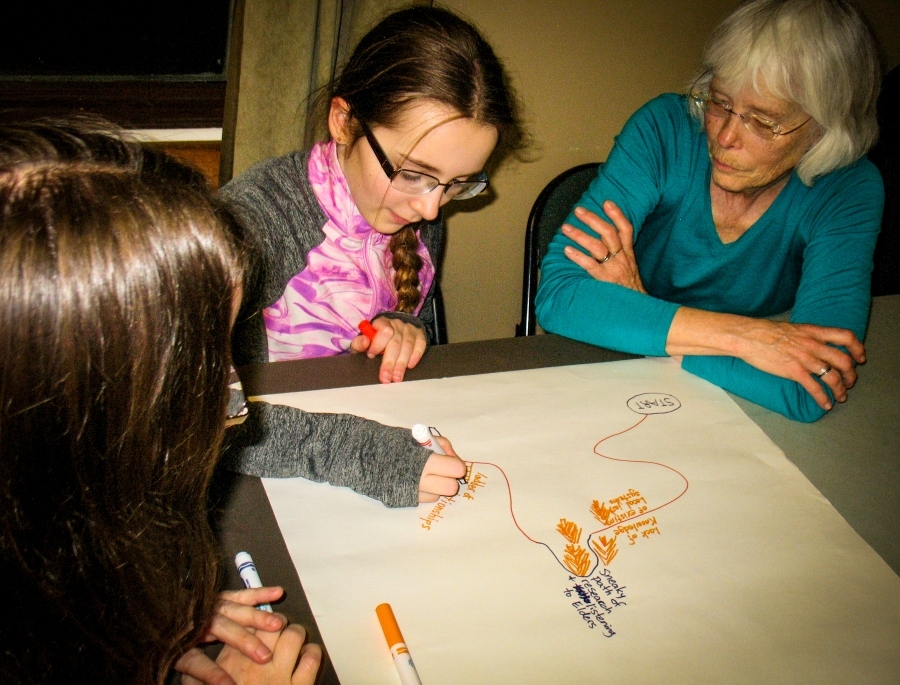 It’s been over 35 years since Canadian Quakers approved a Minute on abolishing prisons, reflecting that “the prison system is both a cause and a result of violence and social injustice,” while recognising a “need for [compassionate] restraint of those few who are exhibiting dangerous behaviour.”1 This concept remains shockingly radical in mainstream society. A typical initial reaction is fear. After all, we hear frightening stories of crime in the news on a daily basis.

I gathered with other Quakers in Calgary on the final weekend of February to participate in a CFSC workshop on penal abolition. The workshop was led by Sarah Chandler, who has been active in CFSC’s work since 1992. Some of the participants were people who work with troubled youth or know people who have been in trouble with the law, while others (including our youngest participant, aged 11) had very little knowledge of the criminal justice system. CFSC has been running these workshops for a couple of years to remind Quakers of what we mean by penal abolition, the reasons behind our long-standing commitment to it, and to connect us to, and inform us about, recent developments in this area.

When we examine the ideas behind penal abolition, they quickly become less radical and frightening. People usually overestimate the percentage of crimes that involve violence. Statistics Canada suggests property crimes (theft, break and enter, fraud, etc., that do not include any physical threats) comprise about 45% of crimes reported in Canada in recent years,2 while violent crimes (including all crimes that involve physical threat or assault3) comprise less than 15%.4 We need to be very clear that by penal abolition we do not mean removing all restraint on those who are a danger to themselves or to others.

Modern child-rearing philosophies tend to encourage a combination of empathy and discipline. It is widely understood that punishment does not effectively teach a child that a behaviour is wrong, even though it may teach them to try to avoid punishment.5 Yet this idea of punishment as a remedy is precisely the philosophy that the penal system continues to promote.

Under this “us” vs. “them” mentality, the idea of locking “them” away to keep “us” safe is very attractive. However, only extraordinarily serious combinations of crimes result in someone who has done harm being permanently incarcerated. Virtually every person who gets into trouble with the law will at some point be released.

The idea that the prison system serves as a deterrent that keeps people on the straight and narrow has long been debunked by studies showing a high rate of reoffending in comparison to what can be achieved through other methods of treatment and justice.6 We need to look for the root causes that led to the offense, and to work with the offender and the community to address those causes. As Quakers reflected in 2010 in another Minute, “justice is done when those most affected by crime are satisfied that things have been made as right as possible, when the affected communities learn from the past, and are confident in their ability to undertake, with compassion, expectancy, faith, and hope, the task of building and sustaining peace.”7

It is important to recognise that the penal system significantly over-represents many classes of vulnerable Canadians. This includes people who are mentally ill,8 brain injured, or developmentally delayed, as well as those who struggle with addictions. It also includes those who live in poverty or have lower levels of education. Indigenous people are dramatically over-represented in prisons,9 a challenge that has been noted in several of the justice-themed Calls to Action of the Truth and Reconciliation Commission.10

The CFSC-led workshop I took part in explored all of these themes, and drew on the experience and understanding of participants, as well as on videos, statistics, and other sources of information. We discussed examples of justice systems in Canada and abroad that support healing.

In one activity, we broke into small groups to draw paths to justice-related goals. We showed impediments as physical obstacles to be overcome, and drew solutions as physical ways of surmounting or bypassing the barriers. One group mapped routes to a unified community at the top of what they called the “Mountain of We.” This involved asking those in privileged groups, who had a relatively easy path to the top, to help others up more difficult paths by extending ropes and helping hands. Many of our maps started out in what one group called “the deep swamp of our own ignorance”. Nevertheless, we persisted and found ways forward.

We were deeply moved by the workshop, which lasted for five hours, broken into two parts (other penal abolition workshops offered by CFSC have typically been three hours). At the conclusion, many of us made concrete commitments for carrying this work forward: from trying to reduce the punitive mindset in our personal relationships, to general support for the work of CFSC, to meetings with politicians.

CFSC is happy to offer this workshop to Quaker or non-Quaker groups who have a commitment to social justice issues. Please let us know if you’re interested.