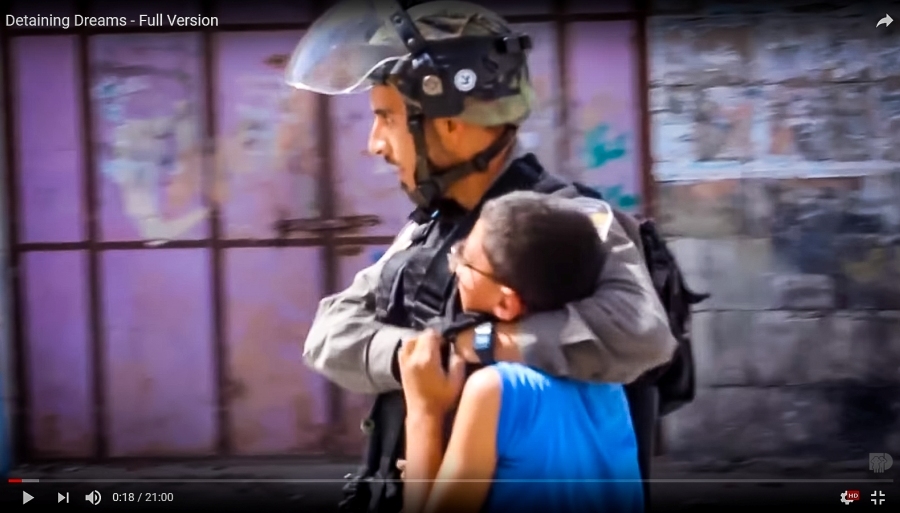 Screenshot from Defense for Children International-Palestine’s short documentary Detaining Dreams, which features interviews with Palestinian children about their experiences in military detention. https://youtu.be/7rw69pLILqw

I’ve learned a great deal from Friends about discussing difficult issues and searching together for unity in the Spirit. Without having to agree, we can find ways to hold a broader perspective and come to experience a deeper truth. Every area that CFSC works on is controversial, and many will passionately disagree with our views on Indigenous Peoples’ human rights, criminal justice, or synthetic biology. CFSC’s views are ever evolving, and we must continue to listen to those with whom we disagree.

There can be little doubt that no issue we work on is more polarizing and difficult to discuss than is our concern for a just peace in Israel/Palestine. The Boycott, Divestment, Sanctions movement has been controversial1 and beliefs about the causes of conflict in Israel/Palestine diverge widely. But there’s one point nearly any human being can agree on – torturing children is never acceptable. (If we are not in agreement on this, I would ask you to please get in touch with me. I would be very interested to sit with and try to understand your views.)

Psychologists have explored a process we’ve all heard of, rationalization, and what they’ve discovered is important for all of us. A key finding is that we engage in actions contrary to our values because of ambiguity. If asked, few of us will say it’s fine to treat children in degrading ways. In fact we’ll likely say just the opposite – such behaviour is repugnant and we oppose it unequivocally. However when the situation actually arises, we may use ambiguity to comfort ourselves. We say, “I’m opposed to mistreatment of children but…” Perhaps the “but” goes: “this isn’t mistreatment,” or: “this is justified for X reasons.”

It’s a deeply troubling fact that we do this, and all of us are prone to it, regardless of our political views. In order to avoid rationalization, we must be clear where a line is, and when it’s crossed. In the occupied Palestinian territories, such a line is crossed regularly and with impunity.

Once, as I was walking on my way to Swarthmore, a Quaker study centre in England, I realized that two children were throwing stones at me. This was frightening. It was dark out and I could barely see the children, crouched in the shadows under a bridge. What if they took out one of my eyes? I sped up and, luckily, was not hit. That experience leads me to understand that having stones thrown at you can get your adrenaline pumping. I’m no supporter of stone throwing as a troubled expression of unmet needs.

Typically, stone throwing is the reason Israeli soldiers give when arresting Palestinian children. In the occupied territories, an arrest warrant does not have to be issued by a judge. This means that children are regularly arrested on vague suspicion. The military often waits until everyone is asleep and then goes to a family’s home to arrest the child in the most frightening and unpleasant way possible. Children are frequently blindfolded and have their hands tied. At this point three out of every four children endures some form of physical violence.2 The US Department of State notes documentation that this treatment includes “beatings, long-term handcuffing, threats, intimidation, and solitary confinement.”3 Children are regularly asked, under duress, to confess to crimes and to implicate friends and family in crimes they may or may not have committed. They then sign confessions written in Hebrew, a language most do not understand.4 While there is a trial, almost all children tried are found guilty. Military law is written by the military, and Palestinians have no mechanism to challenge it, since no elected official approves it. This means such laws can be remarkably harsh, and it is incredibly challenging to prove one’s innocence in military court.

This is obvious cruelty. The line is being crossed, and there is no ambiguity about it. If Israel, with all of its military power, wished to treat Palestinian children in a more humane fashion, it would be easy enough to do.

The harms to Palestinian children are clear (these extend to families and communities as well, creating long-term negative impacts), but what about the effects on Israeli soldiers and police officers? I believe that this practice does not increase their safety, nor that of Israel. I don’t think it deters Palestinian children from throwing stones, and I think that, even if it did, there are better ways of addressing the pain at the roots of stone throwing. I’m also very concerned that learning to rationalize the ill-treatment of children has untold negative impacts. Perhaps soldiers will see it as less problematic to abuse their own children or partners. They may also struggle with a sense of shame or a traumatic moral injury.

At this point we might feel upset about this destructive situation but wonder why CFSC is singling out Israel. Surely many countries treat children this way. It turns out that no, they don’t. Human rights lawyer Jonathan Kuttab was asked this question when he spoke to the new Canada-Palestine Parliamentary Friendship Group recently, and he confirmed that Israel is in fact the only country in the world that regularly uses military law to prosecute children. Jonathan pointed out that unfortunately, in this way, Israel is singling itself out.

Canada has an opportunity to press its ally Israel to make positive changes. We don’t have to agree about the future of the Middle East, or who’s to blame for what, to know that traumatizing children is not the way to build peace.

We encourage you to share this article to raise awareness, and to consider meeting with your Member of Parliament to express your support for the No Way to Treat a Child campaign, a non-partisan effort to end this deplorable situation.

Matthew Legge is CFSC’s Peace Program Coordinator. CFSC is among the founding endorsers of the No Way to Treat a Child campaign in Canada. More information and resources about the campaign are available via: http://quakerservice.ca/NoWayToTreatAChild