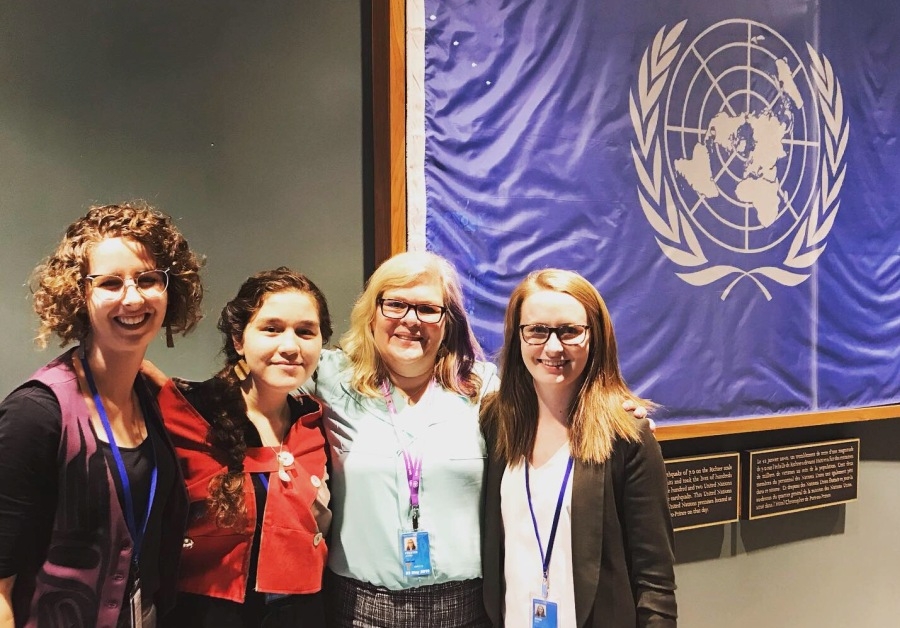 Haana Edenshaw is a youth from Haida Gwaii who accompanied Canadian Friends Service Committee’s delegation to the United Nations Permanent Forum on Indigenous Issues in New York. Keira Mann, who was also part of the delegation, interviewed her about the experience.

Keira: How did you become involved in Canadian Friends Service Committee’s delegation to the UN?

Haana: Well it’s kind of a funny story, it all started when my dad invited me to a talk going on in the village about the UN Declaration [on the Rights of Indigenous Peoples]. The talk was given by Jennifer Preston and Paul Joffe. It was super interesting and empowering to learn about the Declaration. Learning about all of its significance and potential uses was really cool.

At the presentation Jennifer Preston mentioned opportunities for youth to go to the UN, and it seemed like a dream come true for me because I have always been interested in politics and activism. So I asked her about it. I didn’t expect anything to come from it because it seemed like too amazing of an opportunity to be real. I actually knew another member of Canadian Friends Service Committee’s delegation too, Rachel Singleton-Polster. To my delight, I was invited to join the delegation to New York and was given a grant by the Service Committee. I’m very grateful.

You gave a speech, made an intervention, and spoke on a panel while you were there. What was it like speaking at the United Nations?

It was kind of indescribable, it was so nerve-racking to have the eyes and ears of the world on me. I felt honoured and excited and terrified all at once. When I was up there, especially during the speech I gave entirely in Haida, I felt so thankful for everyone who helped me get to that point, like my mother who helped me translate my speech, and Keira and Rachel for listening to me practice and giving me lots of tips. I felt like I was representing my nation and I was imagining my grandparents, aunties, uncles, and ancestors watching over me making my statement and being proud.

During your intervention on the UN floor you gave a few recommendations. If you could give one further recommendation, what would it be?

I feel like the recommendations I did give about climate change and sustainable development goals really reflected what I would have wanted to say. I wouldn’t have spoken if I wasn’t 100% behind the message. I think another recommendation to make, one that would not only benefit my community, but would benefit all Indigenous peoples, as a recommendation should, would be for nations to be mandated to respect Indigenous peoples’ rights to self-determination. I believe that if Indigenous peoples had control over their lands that there would be more protection of the biodiversity and protection of lands that act as carbon sinks that will help combat climate change. As it is now, it is too easy for governments to ignore the land rights of Indigenous peoples. I’ve witnessed this in my own nation where Haida have been fighting for self-determination for generations.

You met with Indigenous leaders from around the world, Indigenous activists, diplomats, and members of the Canadian government. What was it like to meet all of these people and have conversations with them about the challenges facing Indigenous peoples?

I would have to say it was pretty incredible. I hope to become an Indigenous activist, maybe an Indigenous lawyer when I grow older and so it was really inspiring to meet so many people who have dedicated their lives to righting the wrongs committed against Indigenous peoples. I was awestruck most of the time. Everyone was so accomplished and amazing, the people I met and the stories that I heard were probably the main reason that I felt changed when I came back from New York. They also inspired me to become an Indigenous lawyer someday. I wish I could’ve been there longer because I loved hearing everyone’s stories so much!

What were you most excited to tell your friends and family about when you returned to Haida Gwaii?

Why was going to the United Nations such an important experience for you?

Because I had a chance to really represent my community and had a chance to make a difference. I got to learn in depth about the UN, the Permanent Forum, and the UN Declaration. I feel that this experience allowed me to grow and appreciate Haida Gwaii and how far we have come politically in relation to Canada. It was also super important because I got a chance to network and discuss future opportunities with Indigenous activists from around the world.

Did your experience at the UN change the way you see the future of Indigenous rights in Canada at all? Did it give you any ideas?

I was inspired to see so many people working for our rights at the world stage. I also know that if Canada followed the UN Declaration, Indigenous rights would be in a far better place in Canada than they are now. I am hopeful that Canada will fully enact the UN Declaration soon. I would like to see a larger Haida delegation represented at the Permanent Forum on Indigenous Issues. I think Haida have a lot that they could offer at this forum and a lot that can be learned.