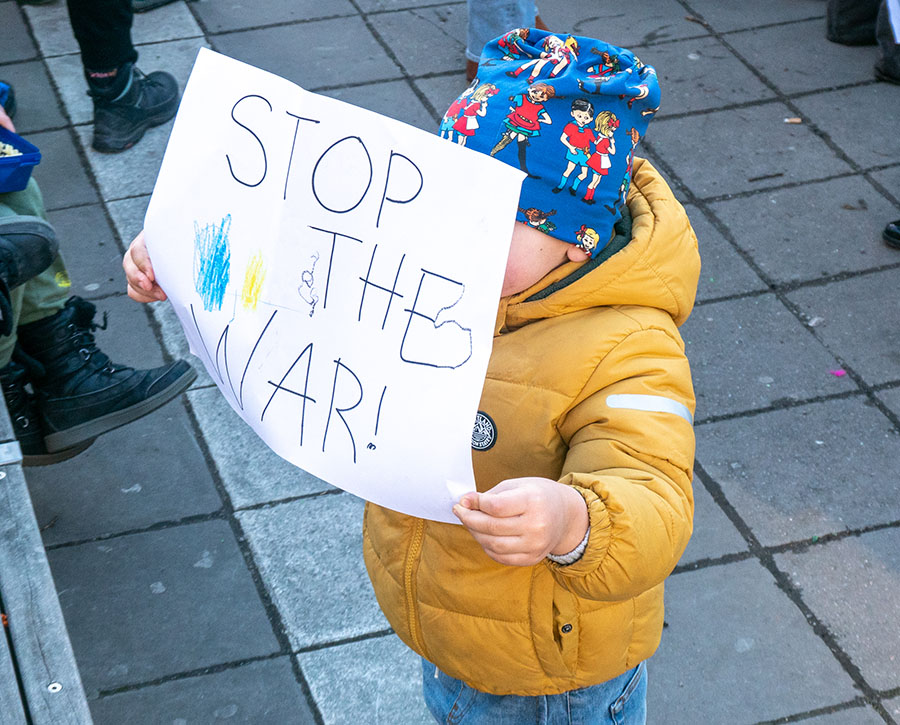 Demonstration in Stockholm against the Russian invasion of Ukraine Feb 27, 2022 CC-BY 4.0 Frankie Fouganthin

Many institutions and ways of doing things persist because of the wide-spread acceptance of TINA [there is no alternative].

— Geoff Harris, quoted in Are We Done Fighting?

We feel so many things when we see images of the suffering caused by war. They may include outrage, sorrow, confusion, and a desire to do something meaningful to help people. When Russia invaded Ukraine, a question arose in the hearts of many who support justice and peace: “What are the alternatives to a violent response?”

From 2006-2007 Canadian Friends grappled with deep questions about the rightness of violence. This came about because the United Nations had just adopted the Responsibility to Protect doctrine. The stated aim was for the world community to never again fail to intervene in a situation like the Rwandan genocide, one where a government was unable or unwilling to protect its own citizens.

Senior US military leaders and academics had reviewed the evidence and agreed that an international force of just 5,000 troops could likely have averted the slaughter of half a million Rwandans. But this was far from the only possibility. Months before the violence even started, world leaders were repeatedly warned about clear signs that atrocities were coming, and none took meaningful action to prevent them.

Quaker Meetings, with support from Canadian Friends Service Committee (CFSC), spent time in worshipful research, discussion, and discernment around the Responsibility to Protect. Eventually, Friends reached unity. The essence of what they told CFSC was this: we support the work of prevention. We call on governments to put far more time, thought, and resources there. And we believe that governments must stop talking about military intervention “in the last resort.” Why? “Thinking of military intervention as a ‘last resort’ assumes that it is inevitable [and] hinders non-military action…” (Minute 57, Canadian Yearly Meeting, 2007).

While so many aspects of Responsibility to Protect were extremely important, since deploying the military remained an option on the table, Friends were concerned that it would keep dominating attention and resources. Friends called for these resources to go instead into violence prevention and peacebuilding.

But many wanted greater clarity about what this could mean. This led Gianne Broughton—CFSC’s Peace Program Coordinator at the time—to research and write a book: The Four Elements of Peacebuilding: How to Protect Nonviolently. Later CFSC asked me to do additional research, which ultimately led to CFSC’s 2019 book Are We Done Fighting? Building Understanding in a World of Hate and Division. Evidence for the power (and limitations) of active nonviolence is woven throughout these books. Section five of Are We Done Fighting? is called “Structural Peace” and is most specific to the topics of war prevention, what can be done during wars, and peacebuilding.

CFSC does not claim to have all of the answers. There are no guarantees of success. But throughout the long study of these issues, we’ve grown increasingly clear that militaries are less likely to achieve good ends such as protecting people, and that what little good they might achieve comes at unacceptable costs: to human and nonhuman life, to environments and our climate, to our creativity and humanity, and to our societies, which could direct these resources and energies elsewhere. For these many reasons, and in keeping with the Quaker peace testimony as we understand and seek to live it, CFSC supports active nonviolence and does not support killing.

Are We Done Fighting? explores evidence that much of what is popularly believed about violence, war, and power is mostly false. It collects and shares stories and research from peace and conflict experts and grassroots peacebuilders, showing what works instead.

To follow are just a few points to consider in response to Russia invading Ukraine.

In every violent conflict there are creative and caring local people working to look after each other. These efforts may not end wars, but they are certainly useful in overcoming the hatred and dehumanization that are so common during wars. Internationals need to find local peace actors and support them. Unarmed civilian protection is also increasingly recognized by the UN for its ability to keep people safe during armed conflicts.

There are also always unarmed civilians engaged in creative noncooperation with all systems of violence and injustice. In Ukraine right now many everyday people are bravely frustrating Russian military aggression through strategic noncooperation.1 We’ve been equally heartened to see many Russians taking great personal risks to oppose the war. Most people (including most journalists) completely misunderstand how powerful noncooperation is, so it doesn’t get the attention it deserves. It has frequently achieved far more than militaries.

At the level of States, there are really not many ways to end fighting and bloodshed. Everyone knows what’s needed: communication and negotiated political agreements. Here’s an excerpt of Are We Done Fighting? on this point:

As individuals there are times when continuing a conversation may not make sense, or may even be dangerous for us—say, if we’re trying to escape an abusive relationship. But, as much as dialogue can be frustrating and fruitless, governments or armed groups in conflict are always communicating anyway and aren’t made safer by cutting off dialogue. Experienced negotiator Joshua Weiss explains:

During times of crisis and conflict, more communication is needed, not less…. When negotiation is absent it is important to remember that communication does not stop, but that messages are sent with actions open to multiple interpretations. During tense large-scale conflicts between nations, when mistrust is high, most actions taken are assumed to be belligerent.

A real world example Weiss offers is one where the stakes could not have been higher—the “Cuban Missile Crisis” of 1962.

Despite incessant prodding by his military advisors that there was no other course of action but a preemptive strike, President Kennedy… kept a back channel negotiation open with the Soviet Union. It was that negotiation that kept the situation from escalating out of control. Kennedy’s overriding interest was to prevent nuclear war, have the missiles removed from Cuba, and save face for the US and he did that as well as meeting the needs of the Soviet Premier Khrushchev.

In conflict situations, each side feels a sense of superior insight and of moral righteousness. They filter their beliefs and decisions through this lens.2 Actions by each side appear aggressive to the other, and the other feels justified in responding in ways that they view as both moral and defensive, but that the other sees as hostile and provocative.

The formula we propose to governments is what we would say for any war: keep thinking and responses complex, let go of simple rhetoric and enemy images, and engage relentlessly in diplomacy and with good will actions that demonstrate a commitment to peace.

Some will say in response: “Yes, but Putin is _____.” Fill in the blank: crazy, evil, impossible to negotiate with…

The celebrated Quaker mediator Adam Curle asserts that in all of his mediation efforts he never met a leader, including ones waging very brutal wars, who was “crazy” or “pure evil.” He felt that leaders are in very difficult situations with impossible competing interests to try to navigate. So he treated them as human beings with tough jobs who sometimes made decisions he strongly opposed, but who always did so for reasons (not for no reason or with no interests to negotiate about).

The Norwegian peace expert Johan Galtung said once in an interview that he had no problem reaching out to Daesh and having reasoned conversations with them about their interests. This was at a time when countless war-justifying media reports claimed Daesh was too fundamentalist, anti-Western, and “crazy” to talk to anyone from the West.

What the experiences of mediators and negotiators suggest, then, is to be very cautious about accepting the diagnosis that Putin is impossible to communicate with and therefore the only option is more violence. The best option is always prevention of violence before it happens. There are always nonviolent ways to prevent wars, but too frequently, they aren’t invested in.

Even after wars have started, though, there are still always nonviolent paths forward. Tragically, these usually take time. They also require overcoming a misplaced faith in violence and the desire to seek revenge.

Just remember: there are always alternatives.3