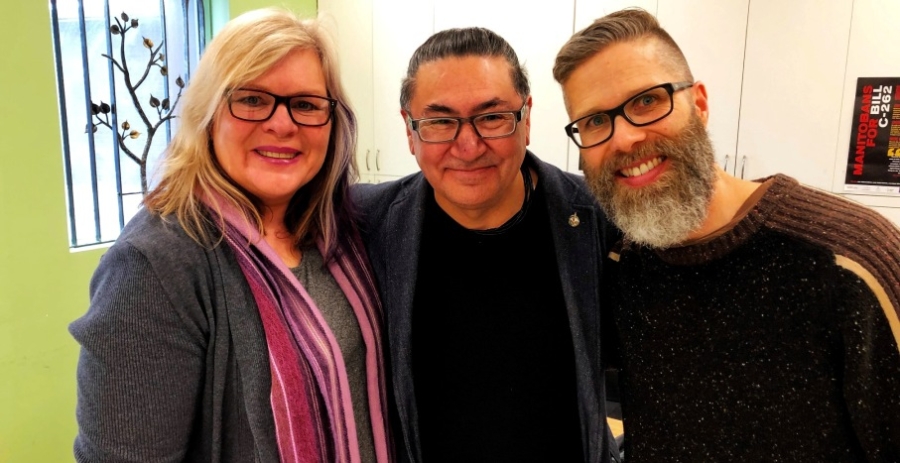 Usually at this time of year, CFSC’s Indigenous Rights Committee writes about our ongoing work with partners advocating for Indigenous peoples’ human rights at the United Nations. We had planned to be in New York in April for the UN Permanent Forum on Indigenous Issues (PFII) and Geneva in June for the UN Expert Mechanism on the Rights of Indigenous Peoples (EMRIP). PFII was cancelled for this year and EMRIP is still listed as postponed until the late fall, but what that means remains uncertain.

Every year at both PFII and EMRIP, CFSC has the pleasure of hosting a dinner with Indigenous and State representatives at Quaker House. We share a meal and have a substantive discussion on current priorities. Quaker House dinners are anticipated and appreciated by all. This is a piece we have not been able to do this year. We do look forward to hosting such events again in the future. Other pieces of our work face a similar challenge: how much can we accomplish without meeting in person?

Yet, along with our other partners in the Coalition for the Human Rights of Indigenous Peoples, we feel it is critical not to allow the international work that we do collectively in the UN buildings to go dormant until large gatherings are safe again. The PFII often has 1,000-1,500 people from all corners of the globe in attendance. We wonder—will this be possible even in 2021?

Instead of waiting to find out, the Coalition has been meeting regularly on Zoom, and meeting also with a team of federal government officials to discuss many topics.

We are looking forward to engaging with the new Canadian Ambassador to the UN, Bob Rae, as he gets settled into the position. We continue advancing discussions that would have taken place in New York and Geneva. And, on a positive note, some organizations that would not have been able to travel have been able to participate in the Zoom conversations. However, hours on Zoom cannot replace all the dialogue and connections that take place at real world meetings. While we continue to advance our work, limitations remain.

We are supporting federal legislation to implement the UN Declaration on the Rights of Indigenous Peoples in Canada as a top priority. This legislation was committed to by the current government after the devasting loss of Bill C-262 in the Senate last year. The Coalition has met twice with the Special Advisor on Indigenous rights to Attorney General/Minister of Justice David Lametti to share information.

It is vital that legislation is developed in cooperation with Indigenous peoples and that it meets or exceeds the standards set by C-262. C-262 was widely supported by Indigenous peoples across the country and adopted by the House of Commons before the Senate prevented it from receiving Royal Assent. There is no need to re-invent the wheel and begin this work again. The federal parliament has been mainly restricted to work related to the pandemic until now, but this fall, when parliament reconvenes, the legislation on the Declaration must be a priority, to ensure that it has the time to move through the various stages to reach Royal Assent.

C-262 was widely supported by Indigenous peoples and adopted by the House of Commons. There is no need to re-invent the wheel.

This legislation is a point the Coalition would have highlighted at the UN this year, to remind Canada of its commitment. It is the unrelenting work of the Coalition that has taken the government of Canada to a complete reversal—from rejecting the UN Declarationin the international arena a few years ago to now being a State poised to have implementation of the Declaration, guided by a legislative framework. Such legislation will serve as a highly useful example for other States to follow. Achieving this will have an impact for Indigenous peoples globally. It is being carefully tracked by Indigenous peoples and States in other regions of the world.

In addition to our work with the Coalition for the Human Rights of Indigenous Peoples, we are promoting this legislation by working with a circle of other Canadian faith bodies. There is a web site in process and an advocacy tool hosted by our friends at Mennonite Central Committee.

In July, I was pleased to join former MP Romeo Saganash, and Kukpi7 Judy Wilson of the Union of BC Indian Chiefs, during a webinar hosted by Mennonite Church of BC to present on the importance of the Declaration and the need for a legislative framework to ensure its implementation. I was asked to share on how Quakers had been involved with the Declaration. I also discussed why this is important for people of faith and how settlers can be good allies in this work.

As CFSC’s work continues from home offices and Zoom meetings, international work in solidarity Indigenous peoples’ human rights remains a high priority. The federal legislation is a good example of how that work happens locally, nationally, and internationally.

Jennifer Preston, Hamilton Meeting, coordinates CFSC’s Indigenous rights program. This is the first time in two decades she has not been to the UN in the spring. Learn more about CFSC’s work in support of Indigenous peoples human rights.